Whilst studying professional hospitality courses at Bridgwater & Taunton College’s Quantock Restaurant, the students were lucky enough to work with no less than 6 guest chefs and 6 student chefs as part of the Restaurants gourmet evening experience throughout the academic year.

First up was Hannah Holleran, an alumni of Bridgwater & Taunton College having spent 2 years at the College, followed by an advanced apprenticeship with work placements at Heston Blumenthal’s Hind’s Head Restaurant in Bray and Roux at Parliament Square. So impressed were they that Hannah secured a full-time position, working under Head Chef Steve Groves, MasterChef and Professional Winner. In October 2017, Hannah moved to Helix which is based on the top floor of the Gherkin, London and more recently has relocated to Australia. 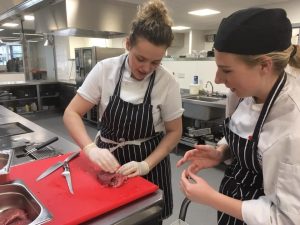 Hanna showing students how she would like the food prepped for service.

In November we were delighted to welcome Barrie Tucker, the Head Chef at the award-winning Luttrell Arms Hotel, Dunster. Under Barrie’s leadership, their stylish restaurant Psalter’s has achieved two AA Rosettes since 2016. Barrie’s path to the grand entrance of the famous hotel on Dunster’s medieval High Street began at the Castle Hotel, Taunton under the guidance of Phil Vickery, and a career highlight at the triple Michelin starred Chez Nico with the legendary Nico Ladenis. Now very much based in West Somerset and Exmoor, Barrie champions locally sourced ingredients and beautifully presented food from his menus. A recent innovation was the creation of the Porlock Pie made with local oysters, Exmoor Venison and ale, which was inspired by a conversation with a local producer in the bar! 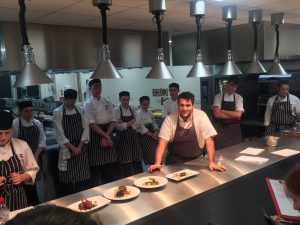 At the start of the year, we were lucky enough to welcome John Godfrey, the Head Chef at Clavelshay Barn Restaurant. The restaurant has won many awards for its food over the past few years and prides itself on the use of the best local produce, including some from the farm itself. It transpires that John is locally sourced too having attended school in Taunton as well as studying Professional Cookery with us here at Bridgwater & Taunton College over 9 years ago!  John has also spent time working in Cornwall and 5 years at The Castle Hotel as Sous Chef. 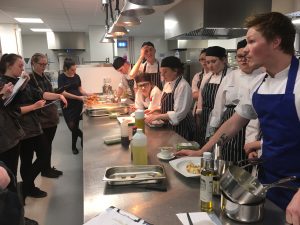 Front & back of house taking notes from John Godfrey

Next up Dez Turland, the Marketing Chef of the Brend Hotel Group hosting his first Gourmet Evening with us. Since 2010 Dez has been based in North Devon at the Saunton Sands Hotel. In 1991 he started as Head Chef of the Royal Duchy in Falmouth and then became Development Chef in 2007 before taking on his current role.  Dez is passionate about his work and travels extensively sharing his skills across the country within professional kitchens as well as many colleges. 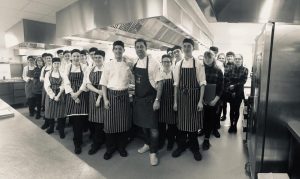 Due to Dez’s support with our Valentines chef night, the Quantock Restaurant donated a staggering £800 to the ThinkAmy Charity chosen by our students.

In March we invited 6 of our very own student apprentices and chefs to host their own gourmet evening. The student experience is at the heart of everything we do and this was Sam, Charlotte, Jamie, Ben, Rebecca and Jade’s time to shine. They didn’t disappoint with Salmon and King Scallops to start, Venison as a main and Dark Chocolate Delice to finish the ensemble. 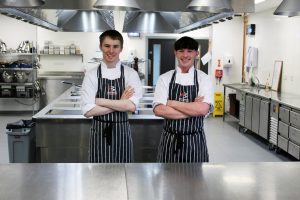 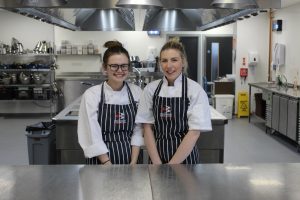 Head Chef of the Swan at Bampton, Olivier Certain was our penultimate guest chef in May. Olivier came to England in 1998 with the intention of staying for 2 years to practise his English, but the Marseille-born chef met his wife Melenie in Somerset and has never left! After graduating from the Marseille Catering School, and having received training from the Michelin starred La Bonne Etape Chateau Arnoux and Les Roches in Le Lavandou, Olivier, perfected his craft under chef and mentor Andrew Dixon in 2001 (3 AA Rosettes) at Porlock Weir. He then moved on to become Head Chef at Woods in Dulverton in 2006. It was here he received 2 AA Rosettes and the Somerset Dining Pub of the Year Awards for 2008, 2010 and 2011. Olivier joined Clavelshay Barn Restaurant as Head Chef in May 2015 before moving to The Swan in 2018. 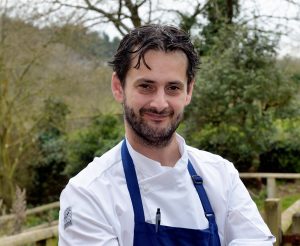 As our final guest chef for this academic year, we were delighted to welcome Mark Potts, Head Chef of 3 Rosette The Somerset Dining Room at The Mount Somerset Hotel and Spa. Mark was previously Head Chef at Fallowfields near Oxford where he also achieved 3 Rosettes.  The list of well-respected and highly acclaimed organisations goes on to include The Lords of the Manor, a luxury hotel in the Cotswolds and the highly acclaimed Champignon Sauvage, Cheltenham. 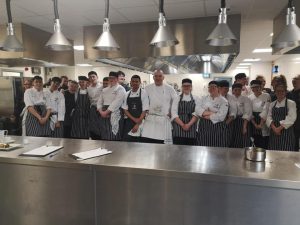 Mark Potts with Quantock students after service for the last Guest Chef Evening of the 18/19/ academic year.

Mark has supported our students throughout his time at The Mount Somerset Hotel and Spa although this was his debut as our guest chef. Marks food ethos involves using prime ingredients – served with delicious garnishes – which are cooked to perfection to extract as much flavour as possible.

According to AA Senior Hotel & Restaurant inspector, Garry Baldwin MIH, “Mark’s cuisine is yet another reason to truly put the Mount Somerset on the map; a simplicity of flavours with the ultimate respect for ingredients from the local South West larder. As with all chefs cooking at this level, Mark brings his own unique imagination and skill to make the dining experience truly memorable.”

The Quantock Restaurant will reopen on Thursday 19 September 2019. For more information please see the following link or email tomlinsonr@btc.ac.uk  .